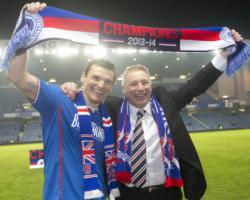 Rangers keep rolling at IbroxRangers took another step towards a century of points as they recorded their 32nd League One victory with a 2-1 win over Ayr United at Ibrox.Gers defender Bilel Mohsni netted twice, either side of the Honest Men's equaliser, scored by Alan Forrest - younger brother of Celtic winger James.The triumph moves the new third-tier champions to 98 points and leaves just them with just two fixtures - Stranraer at home and Dunfermline away - to negotiate as they seek to complete their league campaign without suffering defeat.Ayr were one of three teams not to have scored against Ally McCoist's side as they steamrollered their way to promotion.And it looked as though their miserable record against the fallen Glasgow giants would continue as Mohsni headed in from a corner on 54 minutes.But Forrest then left the Ibrox crowd - well short of the 40,651 announced by the hosts - stunned when he made the most of a slip up by Arnold Peralta to level for the Somerset side on 69 minutes.However, normal service was resumed for McCoist's men when Mohsni pounced on a loose ball inside the six-yard box six minutes from the end to smash home his 12th goal of the season

Rangers boss Ally McCoist made just one change to his team as Arnold Peralta - fit again after a hamstring strain - took the benched Kyle Hutton's midfield slot.The Honest Men, meanwhile, named Michael Moffat - a third tier player of the year nominee alongside the home side's Lee Wallace, Nicky Clark and Jon Daly - as the spear of their attack.And it was the 30-year-old who drove through the middle after eight minutes to open up the home defence before strike partner Craig Malcom took over, squirming a low shot just wide.Rangers responded with their first chance nine minutes later as Stevie Smith swept a low ball in behind the Ayr defence

The Irishman, though, fired over.They came close again midway through the half when Dean Shiels sent Smith down the left again

The full-back's cross bounced off Daly's head and landed at Peralta's feet but the Honduran took too long getting his shot off and goalkeeper David Hutton raced out to block.Rangers stopper Cammy Bell was not a stationary figure though as he also darted from his line to deny Michael Donald on the half-hour mark.In general though, entertainment had been in short supply

There was a brief moment of drama, however, as Mohsni and United boss Mark Roberts involved themselves a touchline spat.The fiery Frenchman faked the throw the ball at the Roberts, who responded by kicking the ball at Mohsni before a quiet word from referee Iain Brines calmed the flaring tempers.Moffat seemed to be well off-side as he raced in behind Lee McCulloch just before the break before wasting the opportunity by firing well over Bell's goal.But it was the home side who made the breakthrough nine minutes after the interval as Mohsni jumped highest to meet Aird's corner, powering his header past the motionless Hutton.The Somerset stopper did better moments later when Ian Black raced through on goal, sliding out to block bravely again.Despite failing to add to their lead, Rangers looked in no danger - until Peralta mistake handed Ayr their leveller.The midfielder was miles short with his pass back and that allowed Scott McLaughlin to roll in Forrest, who made mistake as he poked past Bell.Peralta's punishment was to be substituted almost immediately.His replacement, Nicky Clark, helped the Ibrox men reclaim their lead

With Ayr pinned in after a corner, Nicky Law threw across a inviting ball which Clark met with a firm header