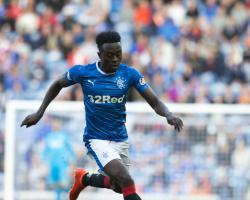 With leaders Celtic facing Aberdeen in the Betfred Cup final on Sunday, Mark Warburton's side knew a win at Firhill would be enough leapfrog the second-placed Dons but they left it late.

Substitute Dodoo, who came off the bench on the hour mark, rode to Rangers' rescue with a volleyed equaliser after 81 minutes before slotting home the winner in the fourth minute of added time.

Partick Thistle, meanwhile, dropped to the foot of the table after Dundee continued their recent resurgence with a 2-1 win against Inverness.

The Dark Blues have won three of their last four games and Craig Wighton got them off and running at Dens Park on 25 minutes.

Kostadin Gadzhalov doubled Dundee's lead on the hour mark before Carl Tremarco made it a nervy finish, but Caley saw Lewis Horner sent off in added time.

Hearts remain fourth after Bjorn Johnsen scored in either half in a comprehensive 3-0 home victory against Motherwell.

The Jambos had drawn their last three league games, but Johnsen's double and Jamie Walker's 66th-minute goal secured the win and left them just a point behind Aberdeen.

Hamilton have won just once in their last 10 Premiership games, but Ali Crawford did manage to salvage a point in their 1-1 draw against Ross County.

Liam Boyce headed home on 39 minutes for County before Crawford scored with a free-kick 13 minutes from time for Accies.