Joey Barton committed to Rangers despite being banished from training ground 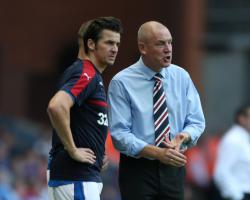 The controversial midfielder found himself at the centre of yet another controversy when he was sent home from training on Tuesday, following what is understood to have been a changing-room row with team-mate Andy Halliday and boss Mark Warburton.

He was told not to report back to Gers' Auchenhowie base until Monday - ruling him out of Saturday's Ladbrokes Premiership clash with Ross County - as Warburton called for a period of calm.

But when news of the dispute broke on Thursday afternoon, it appeared the 34-year-old's short stint at Ibrox was already over.

However, just hours after apologising for the "harsh words" he aimed at his colleagues on Twitter, he told TalkSPORT he was going nowhere.

Barton said: "I'll sit down with Warbs on Monday - that was always the plan, once the lads win on Saturday because that is the most important thing

I'll be supporting my team-mates on Saturday, that is all that matters.

"I've got to re-evaluate stuff

Now that this has happened it changes the landscape slightly.

There's nothing at all that has altered me from that task.

"All I want is for Rangers to win and for us to be the best we can possibly be, on the training ground and at a match on a Saturday."