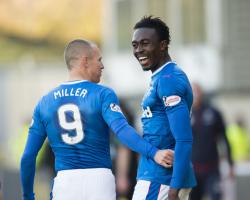 The Light Blues required a stoppage-time goal from Harry Forrester to give them a 1-0 win over Dundee last week but looked to be heading towards their first defeat by the Jags since 1993 after Kris Doolan scored in the 76th minute.

However, Dodoo, on for Joe Garner on the hour mark, levelled with a finely-executed volley in the 81st minute before drilling in the winner in the fourth of four added minutes

It was enough to take the Ibrox side above Aberdeen into second spot in the Ladbrokes Premiership by two points.

The 21-year-old attacker has featured mostly off the bench since signing from Leicester in the summer - he has started only twice in 13 appearances - but his first two league goals put him in the frame for the match against Hearts at Tynecastle on Wednesday.

"I thought he did well today," said Warburton.

"He started central, we have used him out wide but we have striking options and he has banged on the door and said he wants his chance, and all credit to him

"He is a great young professional, he is first in every morning with the masseur, he is always working on his finishing and I am delighted for him.

"He was asked to make a difference when he came on and he did that."

Warburton, who revealed Josh Windass stayed in at half-time with a hamstring problem, pointed to a good penalty claim when Forrester was challenged by Thistle captain Abdul Osman early in the second half, as he made a case for deservedly leaving Maryhill with all three points.

He said: "You have to say you can admire their work effort and desire and they kept on going but we were disappointed in the first half and were frustrated at half-time.

"We didn't squeeze play, we didn't look after the football and I thought we came out in the second half much better

"But we must take our chances, we must be more clinical in front of goal

"Rob Kiernan stepped in 20 yards inside their half and we got the first goal, all credit to Joe Dodoo.

"And I think we deserved the win in the end but (it was) frustrating in the first half."

Jags boss Alan Archibald was "bitterly disappointed" with the result but pleased with his side's performance, especially after their 2-0 defeat at Motherwell last week.

"I thought they were good individually and collectively.

"I thought we had the better of the first half, we contained Rangers and got some good opportunities.

"We knew they were going to change at half-time and they did.

"Their movement was good, they started the second half better but it ebbed and flowed as the second half warmed up and I think it suited us at times and I thought we got a goal we deserved

I am just so disappointed we didn't see it out."